Why the Institute for Extraordinary Banking™ Started….

There was a time during the “great recession” when bankers couldn’t walk through the hallway at a banking conference without being harassed by others in the hotel.

Around that time, the Gallup Organization singled-out “banker” as the least respected profession in the country.

The very people who were always salt of the earth, supporters of their communities (and the people within) were being lumped in with a few greedy and unscrupulous bankers.

I was distraught—and then angry. I grew up in this industry. All of our clients were in this industry—I knew the character of the individuals. And I knew the story that was being told in the media didn’t reflect the heroic bankers I knew…

The ones who, while being vilified in the media, were working day and night to keep the struggling economy going. It was not an easy time to be a banker. And I decided that somebody needed to do something.

But there was a problem… last time I checked, there’s nobody named “somebody.”

I called my always-supportive husband that night before going home and said, “You know how we are always touched by the same parts of movies where the ‘ordinary’ person is called to do something ‘extraordinary’—just because they are right in the middle so it makes that person the only choice.”

They are chosen by the circumstances.

I explained that SOMEBODY needs to do something and there is no “somebody” in a better position to do this. “We need to do this. We’re going to fund this ourselves… but this just plain needs to be done.”

“Sounds like we’re doing this,” were those supportive words that were the beginning of the “Banky™.

The way I would change people’s opinions was simple—I would find and shine a bright light on the good work that people like YOU do every day.

Your local communities simply wouldn’t work without you.

Through the Institute, we recognize the Best Banks in America™ through the Banky™ award.

Like the Grammys, the Emmys and the Tonys, consumers are used to making their buying choices by having the field narrowed.

The Banky™’s go to the Best Banks in America™—those who are philanthropic, have extraordinary customer service, a great culture, are innovative and progressive, and help others manage their money by developing the financial literacy in their markets.

About Founder and Chair, Roxanne Emmerich 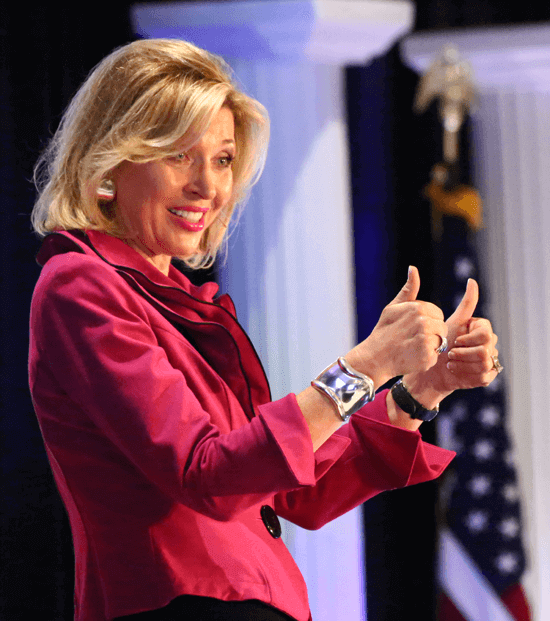 Nobody has helped more banks get to top performance and stay there than Roxanne Emmerich.

She is the authority on high-performance culture in banking. As CEO of The Emmerich Group, Roxanne has personally guided over 300 banks through profound performance transformation taking most to top quartile performance rapidly and many to Top 100 performance within just a few short years.

Roxanne is the author of four books including Profit-Growth Banking, repeatedly referred to as the “bible of elite banking.” and Thank God It’s Monday!: How to Create a Workplace You and Your Customers Love… a New York Times, Wall Street Journal, Businessweek, and international bestseller.

After starting a DeNovo that was featured as one of the fastest growing, fastest-to-profit in the country, she was invited to many CEO stages to tell the story of how she did it. Roxanne then founded as a primary investor two other DeNovo banks.

Roxanne has been awarded titles including: Philanthropist of the Year and Entrepreneur of the Year. She was inducted into the National Speakers Hall of Fame and was singled out as a “Distinguished Alumna” by the University of Wisconsin.

She’s been an innovator, and a driver of best of the best-practices in banking since 1989, and the leading advocate for the vital role of community banks.

The Institute for Extraordinary Banking™ is the next step toward fulfilling the mission of taking banks to a level of performance they never dreamed possible.

Isn’t it time YOU were recognized as one of The Best Banks in America™?

Notify Me When Banky Nominations Open for 2023

We believe in a firm handshake, a look in the eye
and that your banker can be your best friend.

We believe in farmers, working moms,
and bake sales on the weekends.

We believe in the potential of people and the
joy that comes from a job well done.

We believe there’s nothing more noble than
helping people feel safe and secure.

We believe that true wealth is the love
of family, the civility of home, and a
vacation with your kids.

We believe better banks deserve
to be paid more.

We believe community banks
drive the heartbeat of America!

© Copyright 2023 The Institute for Extraordinary Banking™

Type and Press “enter” to Search